What follows are the rules of play for All or Nothing, a trick taking card game for people, young or old, in all walks and stages of life, who truly enjoy card games, camaraderie and friendly competition.

How to Play:
For 3 to 6 players. With 3 or 4 players, deal each player 10 cards. With 5 or 6 players, deal each player 8 cards. There will be cards left over with anything other than 6 players. Place those aside for the next dealer.
Players start with 100 points, the goal is to get to 0 points or to have the lowest score at the end of 10 hands.
The player to the left of the dealer bids first, then clockwise around the table. Bidding is simple: you bid All to take all of the tricks, or Nothing to take none of the tricks. The scorekeeper notes the bid on the provided score sheet.

Play Sequence:
The first player that bid is first to lead. That player plays any card from their hand. If the player is attempting to take all of the tricks, that card will likely be high. If that player bid Nothing, then that card will likely be low. Play continues clockwise, following the suit of the first suited card played, unless an A or N card is played These ALL or NOTHING cards (shown in second photo below) may be played at any time.
The ALL or NOTHING cards are special, and will be described in full below under card hierarchy. What's important now is that the highest card of the lead suit takes the trick. The person who took the trick leads next. This process is continued until all cards in the players hand are played, one per trick, completing that hand.

Scoring:
If a player bid NOTHING and took no tricks, that player gets 20 points subtracted from their score. For example, if you had a score of 100 and successfully bid NOTHING in hand 1, your score would then be 80. If a player bids ALL and takes every trick, that player gets 100 points subtracted from their score. If that player had 100 points or less at the start of the hand and reaches a score of 0, that player immediately wins the game.
If a player fails to make their bid, either ALL or NOTHING, they get 10 points added to their score for each trick they missed their bid by. So if you bid all and two tricks were taken by other players, you'd get 20 points added to your score. If you bid NOTHING and took 1 trick, you'd gain 10 points to your score. That is not how you win, for the record.

Card Hierarchy:
There are 48 cards in the ALL or NOTHING deck: 40 numbered cards, and 4 each of the ALL and NOTHING cards.
Cards come numbered 1 thru 10, in 4 suits. Larger numbers beat smaller numbers. Players must follow suit with the following exceptions:
ALL cards start out high; the first one played is the highest unless it is FLIPPED.
NOTHING cards start out low; the first one played being higher than subsequent NOTHINGs, unless one of them is FLIPPED, in which case the FLIPPED one becomes highest.

FLIPPING:
You will notice some cards have yellow suits below the numbers instead of black or white. These are FLIP cards. They FLIP the associated ALL or NOTHING card to the opposite state. For example, the 1 of Spades (or 9 of clubs) will FLIP the NOTHING card (second photo below) to an ALL card. A 2 of Hearts (or 10 of diamonds) will FLIP the ALL card in that photo to a NOTHING. Notice there are 2 cards shown on each ALL or NOTHING. If the other FLIP card is played (the 9 of Clubs and 10 of Diamonds in these examples) the card will FLIP AGAIN to its original state. So if the 1 of Spades is played, the NOTHING becomes an ALL; it becomes a NOTHING again if the 9 of clubs is played.
Trust me, you want to pay attention to when FLIP cards are played if you have ALL or NOTHING cards in your hand. This is key to successfully making your bids.

That's it! Later you will be able to find optional play rules on www.allornothingcards.com that will provide for team play, harder bidding, and increased level of havoc. That's what this game is all about.

Posted by Anonymous at 10:51 AM No comments:

All or Nothing is a fast-paced, trick-taking game with many twists and turns. The 48-card game of four suits is appropriate for 3-6 players, singly or in teams, ages 8-108.

We are reaching out to avid gamers and game reviewers for their valuable feedback and support.

For insight into All or Nothing game play read the following blog entries (click below):

Please leave your contact information if you would like us to contact you when All or Nothing is available for purchase. We appreciate the time you have taken to visit the All or Nothing website.

With kind regards,
Debby and the rest of the team, Damon, Shannon and Jeff 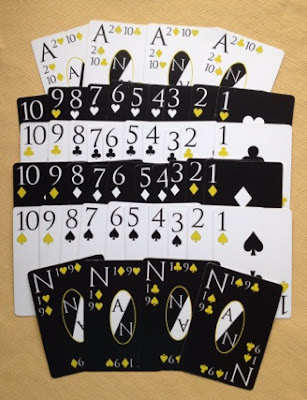 Posted by Anonymous at 9:16 PM No comments:

All or Nothing Mug